Mastering other languages is, without a doubt, a great differential in the job market. However, it is also important to expand your cultural knowledge.

In this way, studying spanish school in Buenos Aires, for example, can be an excellent choice not only to learn another language, but also to discover one of the most European Latin cities around here!

Those who want to learn Spanish often research different language schools and online language courses. Although the option of a Spanish school like Expanish in Buenos Aires is a perfect decision, there are also other cities in the world to travel for this purpose.

It is important to point out that one of the best ways to learn a new language is by fully immersing yourself in a destination whose native language is the one that interests you. Considering that Spanish is a language spoken in more than 100 countries around the world, your choice is a good option.

For Brazilians, the most popular options for studying Spanish are Argentina and Spain. Mexico is another possibility, albeit less sought after. It is important to say that all the countries that have Spanish as their native language are in the our continent. In Europe, only Spain.

In addition, there are several countries that, despite not having Spanish as an official language, have a large percentage of Spanish speakers, such as the United States, Gibraltar and Andorra.

The interesting thing is to be able to live the experience of immersion, because that way you learn faster. Having this opportunity in a spanish school in Barcelona, for example, will allow the student to be surrounded by the language in everyday life at all times, learning that language in a natural way.

Having the great advantage of learning the language directly with the natives will be possible in a spanish school in Barcelona, as well as in Buenos Aires. It's the ideal way to avoid errors when you have to use expressions. In addition, they increase the chances of decreasing the accent when speaking.

Which country to choose to learn Spanish

As already mentioned, learning Spanish with native speakers is the best way to learn the language. However, considering that there are several countries with Spanish as their native language, which of them all to choose?

There are many issues to consider before making the final decision. The most important are the following:

Having considered these points, the doubt will probably end up being between Argentina and Spain. Therefore, it is worth analyzing the advantages of each of these destinations, in order to make the choice that will be an unforgettable experience in your life.

The capital of Argentina is the most obvious option for Brazilians who want to spend a few months abroad in order to learn Spanish. It is a neighboring country and therefore airfares are more affordable.

In Buenos Aires there is a wide variety of accommodations, from apart-hotels, to apartments for rent for the season and hostels, where students from different countries of the world usually stay (a good option if the student is young, as they will be able to make many friends) .

The cost of living, relating the Argentine peso to the real, ends up being more affordable. To give you an idea, today, in 2021, 100 reais would be approximately 1800 pesos.

When the entertainment possibilities, Buenos Aires has all sorts of options. Theaters with shows of all kinds (ideal for practicing Spanish!), tango shows, walks in parks. In addition, it is impossible to leave aside the gastronomy in the country of barbecue, empanadas and dulce de leche!

If you have time, getting to know other cities will be a spectacular experience: Mar del Plata in the summer to enjoy the sea, Cordoba to be in the mountains, Mendoza to discover the origins of the fantastic Argentine wine, Bariloche in the winter to be able to ski in the snow, are some of the options.

Being in Barcelona is being in Europe, close to everything. Taking a direct flight from Brazil, just arrive at Barcelona's El Prat International Airport and start enjoying a beautiful Spanish season.

On a budget, choosing Barcelona to study Spanish has the advantage of being in Europe, that is, being able to be in a few hours by train, by car or even by plane, in countries like Portugal, France or Italy.

The cultural baggage will be impressive, as during a weekend it is possible, for example, to take a fast train and in a few hours be in Paris, visit the Louvre Museum, climb the Eiffel Tower and stroll through the Champs Elysees.

Or take another fast train and travel to Lisbon, and get to know one of the most beautiful cities with more history. Not to mention the opportunity to be in Rome in the blink of an eye, taking a flight, visiting the Coliseum and taking pictures at the Trevi Fountain.

Also, if you go to Rome on a Sunday, you will have the chance to witness Pope Francis' Sunday Mass at the Vatican, in St. Peter's Square!

Choosing the ideal destination to learn Spanish will depend exclusively on your pocket, your tastes and your will. But be absolutely sure: learning the language in a native country is the best option.

Christmas in São Paulo: Parque Villa Lobos will have a unique Christmas Villa

World's tallest Ferris wheel to be a new attraction in Dubai By Redaction18 hours ago0
North America By Redaction20 hours ago0
North America By Redaction21 hours ago0
Hospitality 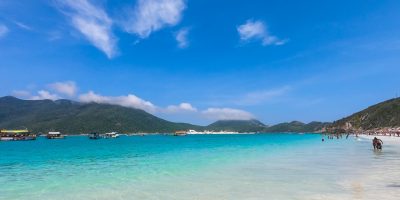